In Memory of a Mentor 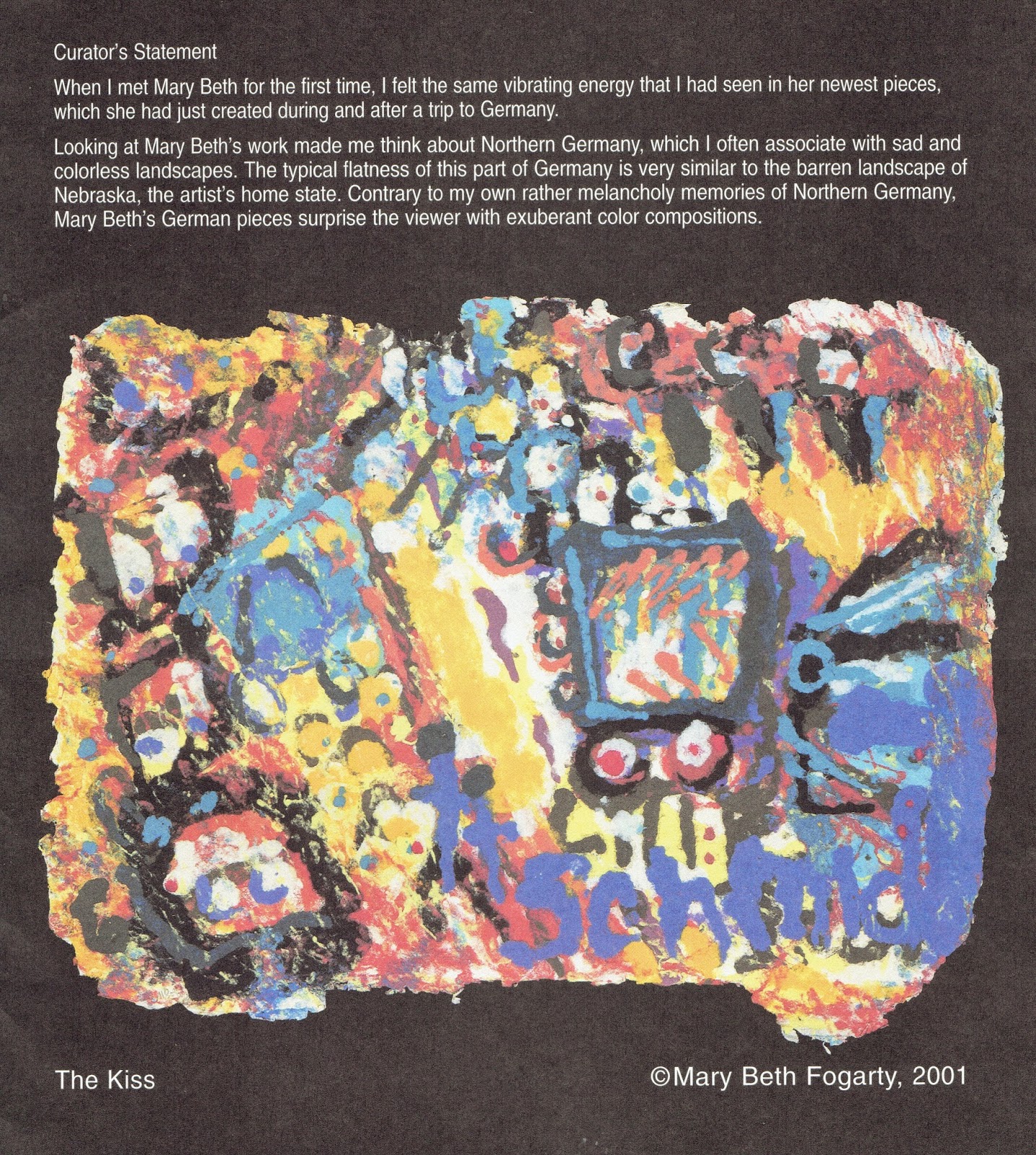 This piece was done after a later trip to Germany but the curator's notes (above) ring true.
Mary Beth's ideas and spirit continue to be an inspiration to me and I dare say, many others.
If you didn't know Mary Beth this article by Dan O'Kane is a good introduction,
if you did know her , it will make you smile!

A small woman verses the forces of nature
Mary Beth Fogarty turns, to the North Sea to inspire her bold, energetic paintings
by Dan O'Kane

If you've ever met Mary Beth Fogarty chances are you've never forgotten her. This diminutive woman is a fireball of energy and emotion. You can't be near her without getting a glimpse of her restless spirit. She has been through a lot in her life - good and bad - and she brings it all to her paintings. In her show Redemption in the North Sea Fogarty celebrates a physical and spiritual journey that started with the music of a Spanish composer and ended with a trip to her ancestral Germany and the frigid waters of the North Sea. in between you have the poetry of Heinrick Heine, the forces of nature as they remind us of our mortality and of course the prickly concept of redemption.  Sounds like a lot to digest, eh? Not to Fogarty.
"The important thing to remember, Fogarty said (this after I tell her she's lost me 10 minutes into our conversation)”is that it all started with the music of Secundo Pasor. He composed this beautiful and strange song for the classical guitar called North Sea, and when I heard it-I was blown away by its pureness and clarity. The ethics of this one man's music completely inspired me. I decided right then that I would go to the North Sea.
The North Sea is a long, cold way to go for a song, but hold on, there's more to it than just the music. Fogarty's grandfather was born in Germany, which borders the North  Sea. He later moved to the U.S. with his older sons to avoid inscription in Hitler's armies.  Fogarty feels an affinity toward her grandfather's homeland and to that country's complicated history.
"This idea of 'Redemption in the North Sea' has to do with my grandfather and my father leaving Germany. It has to do with the redemption of the human spirit, the redemption of the German people."
Fogarty has been to Germany before. She once studied art at the Berlin Artist's Workshop.  While there, she was asked to illustrate a special artist's book of Emily Dickinson- poetry. When she contacted her friends at the workshop about her trip to the North Sea, they suggested she illustrate a group of poems also entitled "North Sea" by the German poet Heinrich Heine. The plot thickens.

Fogarty celebrates a physical and spiritual
journey that started with the music of a Spanish
composer and ended with a trip to her ancestral Germany.

What does all this have to do with painting? Well, the painting "Peace" perhaps tells this story better than any words. On two large pieces of- steel, each approximately 4 by 6 feet, Fogarty has painted a tumultuous seascape. On the bottom two-thirds, the sea, painted in dark, muted tones, boils with enormous brushstrokes. "I actually painted the sea with a broom," Fogarty says. A deep shade of red breaks through the sea in some places, adding to the violence inherent in the water. An horizon line can be distinguished along the top third of the painting, and a spot of blue and a pale yellow make the sky. The painting is dark overall and exudes a great deal of kinetic energy.
"Peace" captures the power and mystery of nature.  And though Fogarty's inspiration is extremely subjective, the image of the tumultuous seascape is a universal one. It's a traditional metaphor for the ends of the world, a reminder of human frailty and mortality. We fear it and we are drawn to it.
"There was something in Pastor's song that captured the movement of the sea. It says, 'come here, come here, no go away." As Fogarty tells me this, her upper body sways dramatically. "This contradiction touches at the heart of the human condition," she adds.
The illustrations for the Heine poems also attempt to capture the fierce beauty of the North Sea. These are made of pressed hand-made paper. The bright colors have been poured on to the wet paper mixture with a ladle and then hand-pressed. The process fixes the colors in a very expressive and organic fashion. It seems like the perfect medium for Fogarty's free-spirited and gestural style. The illustrations are abstractions that gain perspective from their titles, such as "Thunderstorm" and "Dancer."
Other pieces in the show include the large and dramatic "Purification," and "El Hombre," a lovely abstraction that hints at a charging horse. Fogarty, like many artists, is inspired by more than just the concrete world. "Source is the essence of all good art," she says. "It doesn't happen by magic." The show opens Thursday, Feb. 19 at 7p.m., and if you have questions, which I suspect you will after reading this, you can ask the artist herself. She'll be the one swaying back and forth and gesturing wildly. She'll be happy to fill you in.